Buyers took advantage of  the price dip in the market and the low mortgage rates to boost real estate sales in New Canaan. January sales topped the last 4 consecutive years in number of closings. As of this posting there are 20 properties with deposits and signed contracts just waiting for their upcoming closing date.

The numbers used to create this chart come from our local New Canaan MLS which is not guaranteed, but are considered very reliable.  I love numbers and we are being bombarded by them everyday in relation to the housing market in this country. Remember, real estate is very local and I find putting our own community figures together gives me a pretty accurate snapshot of the market in New Canaan.

Inventory will start to increase as sellers try to capture the “bonus” and “spring” markets. However, buyers are beginning to realize that prices have bottomed and interest rates won’t stay low for long. The next few months should be quite active if January and February are any indication.

Amble under the leaf canopy of a private lane to this beautifully expanded and extensively renovated colonial. Abundant windows and French doors open onto a terrace and level sprawling backyard. Terrific light-filled spaces allow your eye to travel through airy rooms to the landscape beyond. Walking distance to New Canaan schools and Waveny Park. END_OF_DOCUMENT_TOKEN_TO_BE_REPLACED 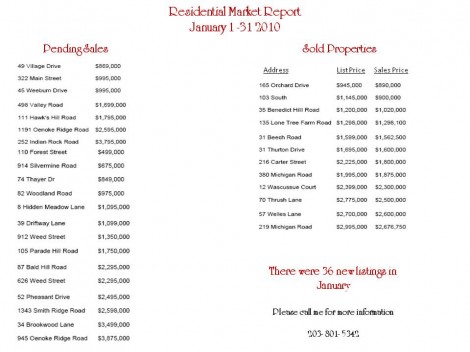 2009 was a very complicated and difficult year for all of us and for residential real estate firms in particular. Brotherhood & Higley wants to thank all of our clients who were bold and ventured into the local real estate market and either bought or sold in 2009. Despite the tumultuous 2009 real estate market, we are pleased to announce that Brotherhood & Higley has maintained our first place standing for total transactions as we have for the past 25 years. 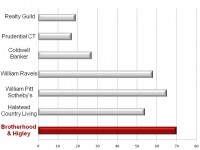 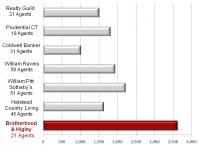 The first half of 2009 experienced the slowest activity levels in the past 30 years. While potential buyers were not only waiting for prices to decline further, they were also very concerned about their own job security. Being unable to sell their present home or unwilling to take the ‘hit’ on their present home, buyers were not even searching for a new home until the middle of the second quarter of 2009. Sellers were slow to adjust their expectations and reluctant to lower their prices. As a result, few qualified buyers were able to negotiate a successful purchase. Banks’ lending requirements have become more prudent in contrast to the liberal lending practices of the last several years. These changing dynamics have created a new environment for our residential real estate market. 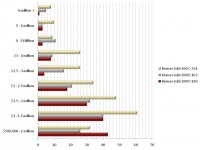 On a positive note, our local real estate market became considerably stronger in the second half of 2009 – sales activity has seen an average of 24 transactions per month, which is consistent with the monthly transaction numbers of more robust years. There has been less interest in higher priced properties during 2009. The most active segment of our market were properties under $2 million, however we have recently seen more transactions in the $3 to $4 million dollar offerings. 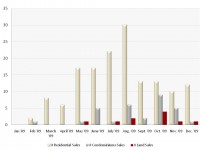 We are optimistic that we will see a continuation of this positive trend in a stronger real estate market in 2010. Even though New Canaan properties have declined 20-25% from 2007 to 2009, property values are more stable as we approach the 2010 spring market. Interest rates are the lowest they have been in nearly 40 years. Some analysts believe that these low rates present a once-in-a-lifetime opportunity. Buyer confidence continues to improve as the media focuses on the stabilizing of the economy and the resurgence of the real estate market with increasing sales. This is a great opportunity to purchase and to sell. The new year typically brings new inventory to the market and should be matched with the pent-up demand for housing among those who typically choose the spring market to purchase.

Please give us a call if you would like to discuss the market.

Best wishes for good health, peace and prosperity in 2010.