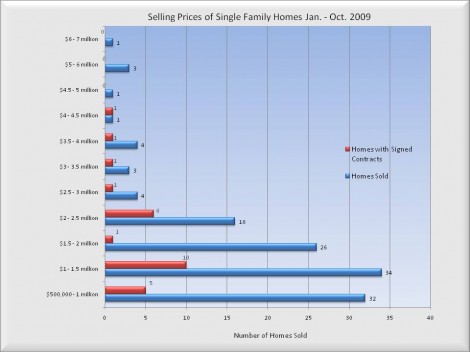 Yes, my third quarter Sold Book ( compilation of all homes sold from Oct ’08 through Sept ’09 ) recently arrived much thinner than previous years, but those buyers who have stepped up to the window have walked away with some incredible deals. As an example, an 11 thousand square foot home built in 2007 sold  for under $6 million, a  7500 square foot home built in 2008 sold in the low 4 million dollar range and several houses consisting of  8,000 sq. ft  listed in the $4 million category were obtained in the $3 million range. In the high end, meaning homes priced at $4million and up, homeowners accepted offers on average 12%  below their last asking price. In many cases this was after several price reductions from the original value placed on the home.  Across the board houses have sold  for between 11% to 15% below their listed price. The most activity has been in the lower price ranges and inventory below $2 million has begun to dwindle. Less supply translates into a stabilization of prices if not an increase.

Sellers will begin to take their homes off the market for the holiday season. Look to see  a number of those to return after the first of the year and it will be interesting to see if  real estate stays on Weight Watchers or goes for some real gains. 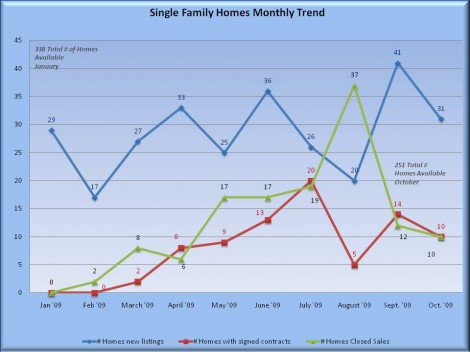 This year’s fall season has seen the traditional influx of new homes to the market in the month of September. With a short window of opportunity before the holiday season sellers scrambled to list their homes in hopes of capturing those buyers who are taking advantage of low interest rates and greater inventory. Prices have stabilized and with banks continuing to offer low rates now is the time to get on board. My prediction is there will be an active market after the first of the year..not the market we saw during  2004-2006, but a healthy exchange in the number of transactions. All indications point this direction from the number of people attending public open houses to the increase in the number of showings on listed homes.  Buyers are amassing information on specific homes and the market in general in preparation of moving forward after the first of the year.